For Women And Non-White Entrepreneurs, The Idea Comes Easy — The Money Does Not

Starting a successful business requires a great idea, paying customers and access to capital if you want it to grow. The business world is tough, but even tougher for people of color and women. Historically, they have a harder time securing business loans and investor funding needed to take their startup to the next level.

That’s why Austin-based accelerator Capital Factory, the Dallas Entrepreneurship Center and other organizations teamed up to create the Diversity & Inclusion Investment Challenge. The $100,000 grant is awarded to Texas startups led by a person of color or a woman.

To listen to the KERA Radio story, visit http://keranews.org/post/women-and-non-white-entrepreneurs-idea-comes-easy-money-does-not.

Tye and Courtney Caldwell, the winners of the Dallas round, know the struggle of fundraising. The couple built ShearShare, an app that matches hair, nail and beauty stylists to empty salon space by the day. The Caldwells had the beauty industry experience, but they were new to the tech startup scene and raising money.

After a lot of research, networking, and building their product, they started meeting with investors. Courtney Caldwell described one awkward encounter with a California investor.

“It’s two gentlemen across the table from us, and the first thing out of his mouth is: ‘I’m kind of glad you guys are not the average white male who graduated from Stanford, wearing a V-neck sweater,’” Courtney said.

The ShearShare founders dusted off their shoulders and have since gained backing from several investors, but their experience isn’t unusual. 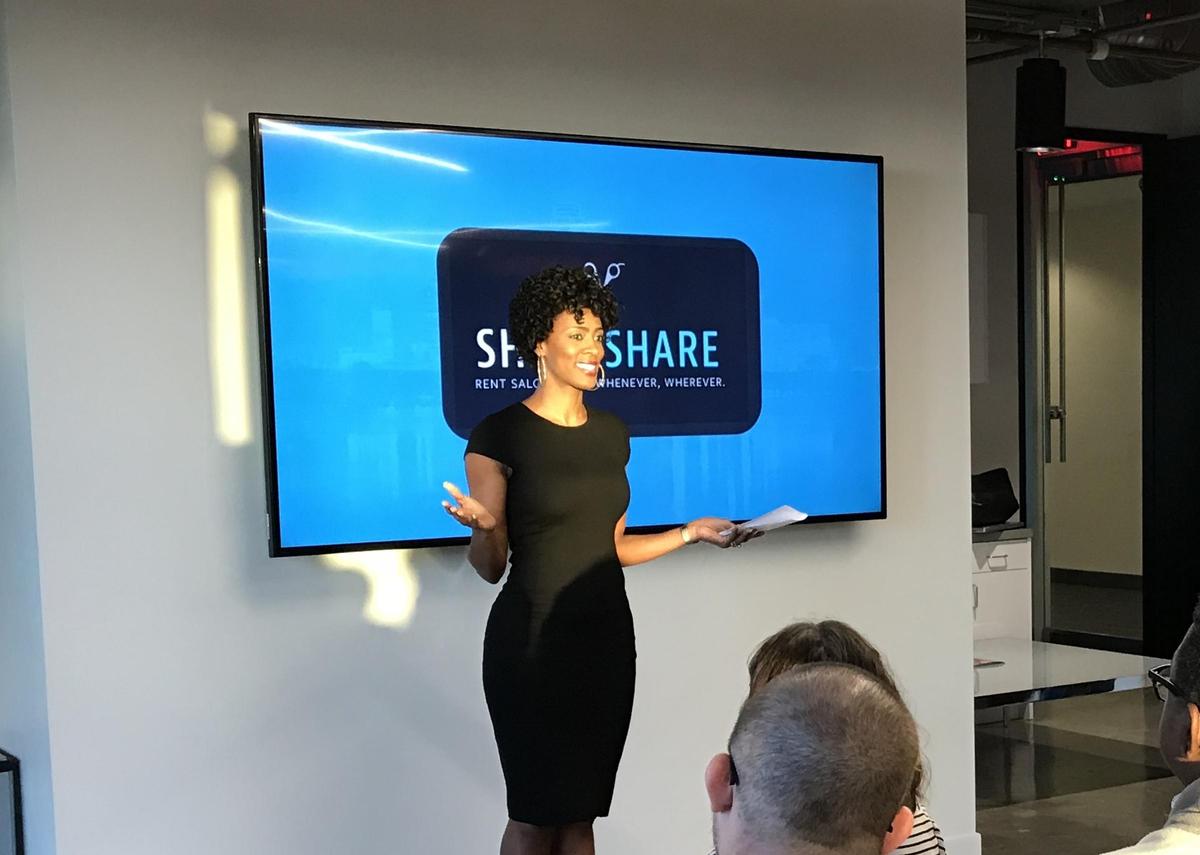 Courtney Caldwell, COO and co-founder of ShearShare, pitches to entrepreneurs and investors on Jan. 23, 2018.

A number of studies in the last 10 years have found non-white and women entrepreneurs often face big hurdles when seeking small business loans. According to the Minority Business Development Agency, people of color are three times more likely to be denied for loans. Non-white and women entrepreneurs are also more likely to rely on personal savings or credit cards for their businesses.

When they do secure a loan or an investor, non-white and women entrepreneurs typically don’t get as much money as their white counterparts.

According to the Minority Business Development Agency, people of color are three times more likely to be denied for loans.

“I think we forget the correlation that generational practices have on access that people have today,” Michelle Williams, executive of the Red Bird Entrepreneurship Center, said. “Even today, we see that housing values are very much tied to the color of the person that lives in that community.”

Williams points to redlining, which limited housing options for people of color, and how it affects where people live and how they build wealth.

A survey last year from the Federal Reserve Bank of Dallas found access to capital is the No. 1 concern for women and non-white small business owners in Texas.

Why the disparity exists

“There is a pay and wealth gap for both of these groups, so they may start off with fewer resources as it is,” said Emily Ryder, a community development analyst for the Dallas Fed.

The pay gap between men and women, as well as white and non-white workers, is well documented. Charles O’Neal, the president of the Texas African American Chambers of Commerce, also points to the gap in financial education.

“Stereotypically, when financial literacy is offered in non-white marketplaces, it’s about balancing the checkbook, it’s about managing their credit score,” he said.

As a result, non-white entrepreneurs are less prepared to apply for a business loan — even if they’re college-educated and their business is successful. The aforementioned business survey from the Dallas Fed and another from the University of Texas found some don’t even apply because there’s a perception they’ll be automatically rejected.

Even business owners who turn to investors face challenges.

“In some cases, women and or people of color may lack some of the more robust business networks that their white male counterparts have,” Ryder said. “This can limit opportunities for things like equity financing.”

“‘You don’t look like me, you don’t sound like me. Are you sure?’ Those kinds of questions start being raised.”

And without that person to vouch for an idea, O’Neal with the TAACC says non-white and women business owners get more questions, particularly about their expertise.

“Bias gets into it,” O’Neal said. “Preconceived notions get into it. It impacts the kind of investment decisions that those kind of folk with resources make. ‘You don’t look like me, you don’t sound like me. Are you sure?’ Those kinds of questions start being raised.”

There have been efforts to reverse this. In 1988, Texas created the Historically Underutilized Business certification to help business owners earn contracts in the public sector. People of color and women are launching their own venture capital funds. Microloans of under $50,000 have also become popular with risk-averse lenders.

However, O’Neal believes microloans and short-term programs don’t make businesses sustainable. Instead, he says it’s up to the lenders and investors to recognize they have a responsibility to correct this inequity and start signing bigger checks.